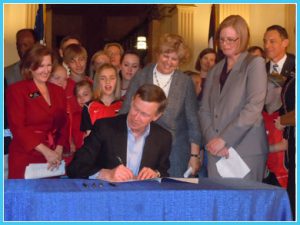 This hard-won piece of legislation will keep our youth athletes safe for the years to come. It requires that coaches get education on how to recognize a concussion, that a player is removed from play if a concussion is suspected and that the student athlete must be signed off by a medical professional before returning to play.

This was a proud day for those of us that have spent over a year meeting with stakeholders, creating a consensus and developing language so the bill works for the Colorado youth sports community.

In the Fall of 2004, Jake Snakenberg was a freshman football player at Grandview High School. He likely sustained a concussion in a game the week prior, however, he did not fully understand that he had experienced a concussion and he did not report his symptoms to anyone. One week later, Jake took a typical hit in a game, collapsed on the field and never regained consciousness. Jake passed away from “Second Impact Syndrome” on September 19, 2004.